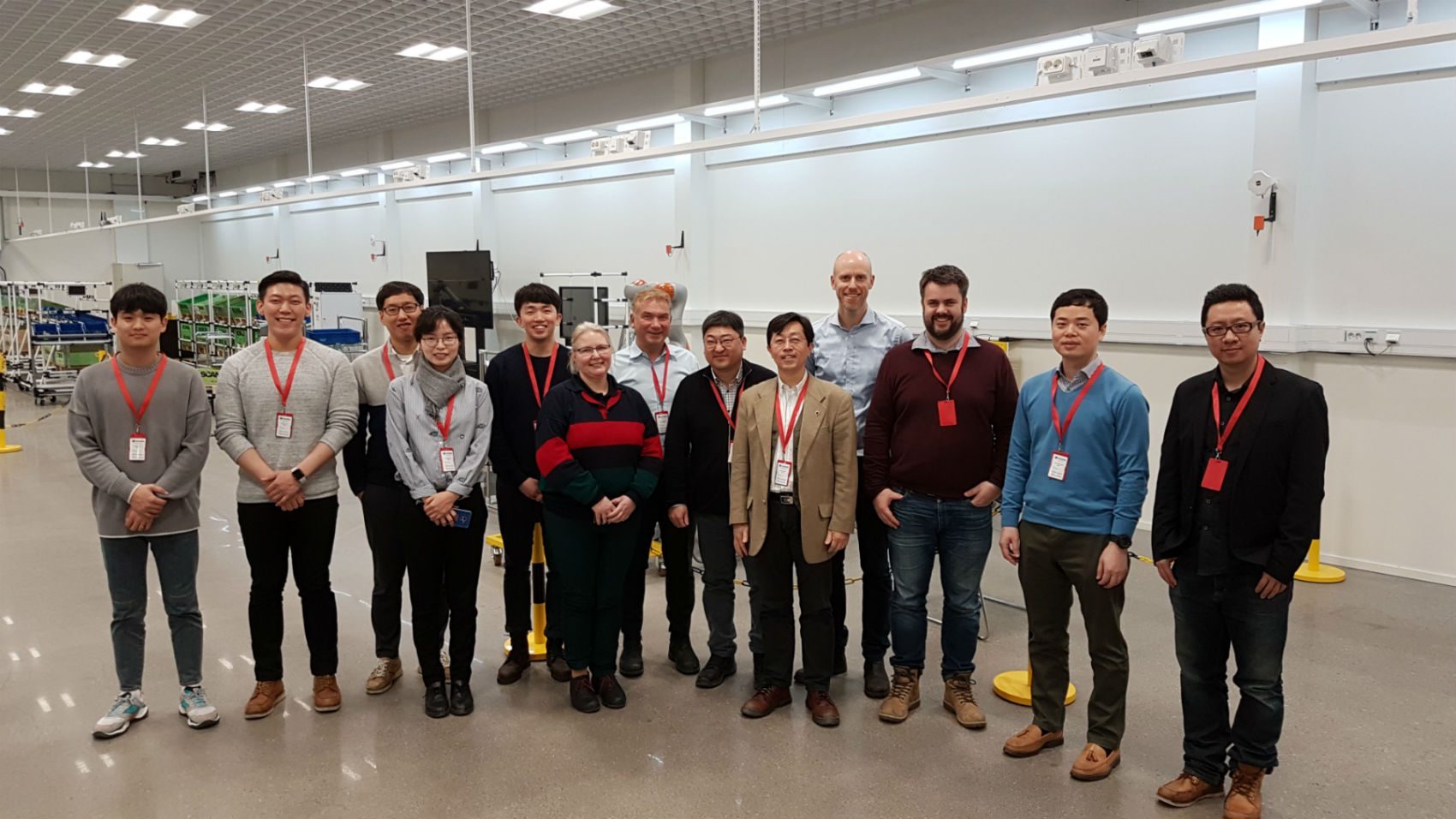 At the beginning of the summer, the international project C-PALS (Cyber-Physical Assembly and Logistics Systems) was launched, in which researchers, technology suppliers and technology users from Sweden and South Korea participate to create the digital factory. Magnus Wiktorsson, project manager and professor of production logistics at KTH, tells us more about the collaboration.

– The idea for the project came about a few years ago thanks to a contact from Produktion2030, which led to a South Korean guest professor with us at KTH. My South Korean colleague and I then got an idea to continue to collaborate between the countries, says project manager Magnus Wiktorsson.

Scania, H&D Wireless and Ericsson, the participating Swedish companies in the project, were already in dialogue with each other about solutions for connected production and logistics equipment. At the initiative of Magnus and his South Korean colleague, they put together a joint project application, which was granted grants within the EU initiative EUREKA, where Swedish Vinnova and South Korean KIAT are the financiers.

Both Vinnova and Business Sweden have been working strategically with South Korea for a few years, and the Swedish government also entered into memorandums of understanding with the country this summer.

The C-PALS project, which has a total turnover of EUR 3 million, is run by a consortium consisting of the Swedish parties KTH, Ericsson, H&D Wireless and Scania, as well as the South Korean parties Sungkyunkwan University, Yura and DEXTA. The purpose of the project is to develop technology and applications for connected assembly and production logistics.

This summer a digital project kick-off was held and the work has now started in each country. During the autumn, the South Korean parties will come to Sweden for the first joint project meeting. The project was also presented as a whole at the I3CDE 2019 conference in Malaysia this summer.

Live cases in pilot plants in both countries

– Together we will develop and test technologies, as well as situations where different types of connected logistics equipment can be used. We will perform live cases at Scania and Yura where equipment is connected – in other words, create an IoT* world. We will then be able to see how the equipmentare doing, if they are used to their full capacity and how they can be better utilized, says Magnus.

Magnus also explains that the countries have chosen to divide the work in the project, where Sweden focuses on production logistics and South Korea on workstations and assembly of products, which makes the work complementary. The researchers’ focus in the project is primarily to look at the values ​​and effects the applications give rise to.

Towards a more sustainable production

To contribute to a more sustainable production is the overall goal of the project, according to Magnus. This is done by including the life cycle of equipment as a dimension. Connected equipment often implies a smarter way of working. Instead of buying machines that “stand and collect dust”, they can be proactively modernized and thus live longer.

The dissemination of knowledge is also an important part of the project. Magnus’s hope is that the project’s results can give support to companies regarding which situations it is worthwhile to invest in connected equipment – and also when it is not. Possibly in the form of concrete decision criteria based on real application cases.

– If we succeed, the project will help to speed up the pace of the digitalisation of plants, even among smaller companies, says Magnus.

Several similarities despite the distance

Magnus hopes that collaboration between the countries can create market profits in the long term. At best, Korean services and products can make Swedish industry stronger and vice versa.

– Despite the distance between our countries, I see that there are great similarities between us. South Korea, like Sweden, has a strong automotive and telecom industry, and we are both smaller countries next to larger ones such as Germany and France, as well as China and Japan. That means there are great opportunities to learn from each other, concludes Magnus.

In the end of October/early November this year, the project plans to organize an event together with the South Korean Embassy in Stockholm around Industry 4.0. Keep an eye on Produktion2030’s website for more information!

Find out more or adjust your settings.

This website uses cookies so that we can provide you with the best user experience possible. Cookie information is stored in your browser and performs functions such as recognising you when you return to our website and helping our team to understand which sections of the website you find most interesting and useful.

Strictly Necessary Cookie should be enabled at all times so that we can save your preferences for cookie settings.

If you disable this cookie, we will not be able to save your preferences. This means that every time you visit this website you will need to enable or disable cookies again.

This website uses Google Analytics to collect anonymous information such as the number of visitors to the site, and the most popular pages.

Please enable Strictly Necessary Cookies first so that we can save your preferences!